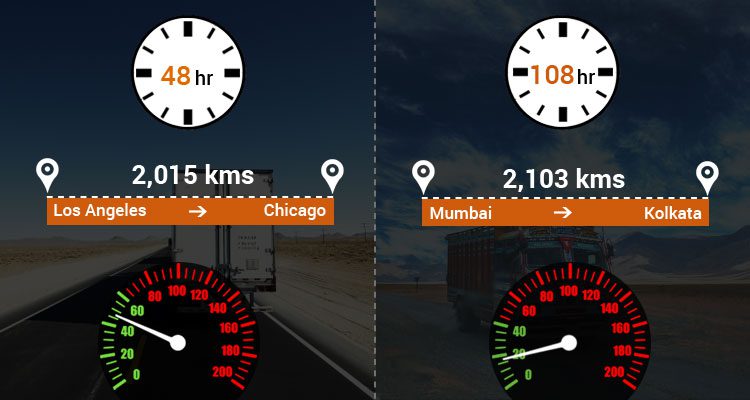 According to the World Bank, India is ranked 46th in the logistics performance index among 155 countries. Crossing the hurdle of some 21 toll booths, and 12 RTO and Sales tax check posts, a commercial vehicle in India moves at an average speed of 300km per day, with an average speed of 40-45 km per hour.

Some of the reasons cited for slow movement of vehicles and delay in road transportation are:

Poor Highway Infrastructure: Most of the roads in India are narrow and congested with poor quality road construction, which slows down the vehicle and affects the longevity of the vehicle

Delays at State Borders and RTO offices: Logistics sector incurs huge losses owing to the delay at chungis (check-posts) for frequent inspection, multi-layered tax structure and waiting time at toll plazas due to congestion. Adding to this is the harassment by police and local authorities

The drivers try to save on fuel by driving on un-tolled roads, which affects the speed

To gain maximum efficiency, it is preferred that 2 drivers are present in the vehicle, especially in case long journeys. However, to cut down on costs, there is usually a single driver who has to stop midway to get some sleep. This causes delay in freight transport and lowers asset utilization.

Key Stakeholders and Govt authorities are well aware of the need for improvement in this sector and various plans have been chalked out and implemented for increasing speed and reducing delays in the trucking sector. Some of these steps include:

KIS – keep it simple as Mr. Sanjiv Gupta of FreightCo India Ltd. follows simple system of Inam (incentive, bonus) to the drivers if they meet the scheduled delivery time.  “We often forget the basics linking objective with earning, sharing where required. The driver is one of the key player in the transportation value chain, and we need to incentivize them so that they are motivated enough to do the movement”, he said. Drivers in India typically get to meet their families, once every 2-3 weeks and appropriate incentives must be chalked out for them.

Traditionally transport companies have been following a double driver system for express road cargo movement. With change in technology and better planning various new start-ups are working on new and innovative ideas. Logistics start-up, Rivigo (previously known as TruckFirst), came up with one such brilliant idea to increase the speed in freight transport dramatically. The company has introduced ‘Driver Relay System’ in line with Indian Railways which ensures that the drivers are replaced every few hundred kilometres and drivers can return home every night. This has improved their speed dramatically, thus making it possible for the delivery of goods from Chennai to Mumbai in just two days compared to the earlier time of eight days. This innovative model improves speed, efficiency, turnaround time for the drivers and improved services. Rivigo monthly average truck movement is estimated above 15000 kms and few trucks peak up to 25000 kms. This model can be followed by other companies as well for increasing speed in transport sector resulting in better profitability.

The training of drivers for maximum fuel utilization and adoption of techniques to achiever targeted delivery time is also important. BMTC plans to implement the innovative idea of installing driving simulators, developed by a retired driver of the Andhra Pradesh State Road Transport Corporation. These machines will train the drivers on techniques for getting maximum mileage, learning the correct way for acceleration and deceleration, getting rid of machine idling at traffic signals, etc.

Maintaining Proper Speeds: Many solutions keep a track on the speed of the fleet and issue alerts when the speed is either too slow or when it crosses the set limit. Speed maintenance, in turn, allows you to save fuel.

Reducing Idle Time: Alerts are also issued by these solutions when the vehicles lie idler than a set duration, allowing you to take corrective measures.

The GPS system and other location based information guides the fleet through proper and shorter routes, saving on time. Many solutions are also able to identify which fleet is closest to the required job and assign the job accordingly.

Load Fulfilment and Matching in Spot-Market

It is estimated that around 20% of the vehicle time is lost in searching for matching load. Due to heavy fragmentation in the market i.e. 75% of fleet owners own less than 5 vehicles; fleet owners rely on local brokers and search for loads by phone calls. However, with increasing technological penetration companies like TruckHall, Trucksuvidha, Freight-bazaar help companies in real-time matching of load and vehicles, resulting in reduction of vehicle idle time.

Probably, the best way to reduce waiting time at toll plazas is the introduction of ETC (Electronic toll collection). ETC does not require the vehicle drivers to stop at the toll booths as it automatically debits the accounts of registered vehicles without requiring them to stop.

In India, the credit for taking genuine interest and steps in the widespread implementation of this system can undisputedly be attributed to the Honorable Minister for Road Transport and Highways , Nitin Gadkari , who in 2014 aimed to make all toll-plazas on national highways across India ETC enabled.

Recently, the National Payments Corporation of India was approached by the National Highways Authority of India (NHAI) to establish an interbank clearing house to enable e-tolling across 350 toll plazas in the country. This will not only save fuel consumption, but also increase freight speed by reducing stoppage time due to congestion at toll gates and also minimize fraudulent practices.

A joint study by the Transport Corporation of India (TCI) and the Indian Institute of Management has revealed that an annual waste of about ₹27000 crore is caused by the delay at toll points. Additional waste of about ₹60000 crore more due to the extra fuel spent on slowing down and stopping at checkpoints. An implementation of ETC will reduce the delay at toll plazas by about ten minutes which is a huge saving in time and cost.

In India, goods are taxed in each state differently. This results in multiple taxing and long delays when freight moves inter-state. It takes an average of 5- 7 hours at each check point, and at inter-State checkpoints. Since around 65 per cent of India’s freight moves by road, the Goods and Service Tax (GST) will prove to be extremely beneficial for the country and the transport sector. Thankfully, Rajya Sabha has approved the long delayed GST Bill. This will replace a raft of different state and local taxes with a single unified value added tax system.

India is also set for a major development in infrastructure as the Government is planning to build eight more world-class express highways in addition to already announced eight expressways. An express highway is a controlled-access highways, mostly 6-lane or above, where entrance and exit is controlled by the use of slip roads. These expressways allow unrestricted movement of vehicles, thus saving in time and costs.

The Cabinet has already approved seven such expressways –

The overall state of Logistics and Transportation in India is far from perfect. However with the surge in industries such as e-commerce and government initiatives such as Make in India, the on-road movement is going to increase multi-fold in the coming years. The government authorities need to get rid of a lot of on-road in-efficiencies and the industry, overall need to adopt technology so that such in-efficiencies and minimized and maximum output can be achieved during goods movement

Varun Biyani, our Co-Founder brings 10 years experience of in IT and building systems in the Logistics space both in the domestic and international arena. Varun has a Master's Degree from Carnegie Mellon University, USA.