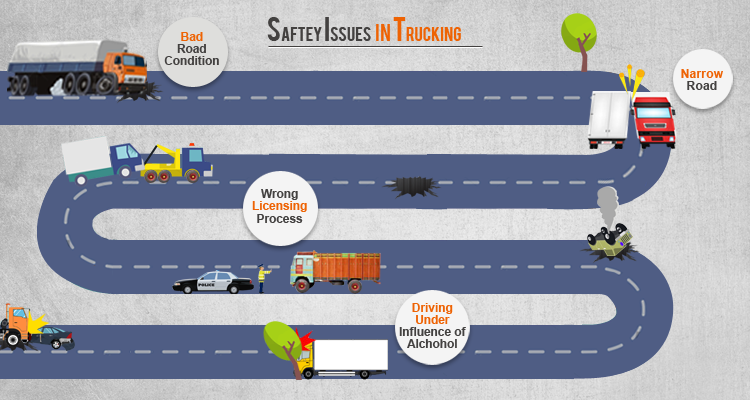 Motor vehicle accidents of any type can be severe and happen in the blink of an eye. And when such accidents involve trucks, the impact and injury caused is manifold because of the sheer size and weight of the trucks used in commercial transport. India accounts for the highest death rates in the world when it comes to road accidents. The daily deaths in India due to road accidents are more than four times the annual deaths in the country due to terrorism.

Sadly enough, majority of these accidents are due to causes which can be prevented by a little precaution and sense of responsibility. The report released by the National Truck Accident Lawyers blames 98 per cent of all truck accidents on faulty trucks and 30 per cent due to driver’s fault. World Health Organization (WHO) in its publication “Global Status Report on Road Safety” states that the major causes of road accidents include speeding, drunk driving, not using seat belts, and failure to maintain lanes on National Highways. Some of the major hindrances to the safety of truck movement include:

It may be mentioned here that the United Kingdom, Australia, Sweden and the United States all include detailed vision tests for granting a driving licence. However, in India, no heed is paid to a vision test as part of the driving test requirements.

Steps taken by the Government and Private Bodies:

In the recent years, Indian Government has taken several measures to tackle this issue. In July 2015, Indian Prime Minister Narendra Modi said that with the increasing casualties and injuries in road accidents, his government will soon introduce laws to enhance road safety. In fact, a new Road Transport and Safety Bill is already under way. On an issue raised in Rajya Sabha, the government had declared in 2014 that it aims at reducing such casualties by the half in the next five years by taking up a number of measures like providing AC cabins to truck drivers and creating access-controlled expressways. Transport Minister Nitin Gadkari added that he intends to increase the length of National Highways from 96000 kms to 200,000 kms, in order to minimise road accidents, by building dedicated corridors for vehicles carrying freight.

The ministry has identified 726 ‘blackspots’ which would be corrected and a budget of ₹11,000 crore has been set aside for it. Besides placing ambulance on highways, work is in progress for making four lanes in two-lane highways.

“Making truck drivers’ cabins air conditioned will be made mandatory as they drive up to 12 hours at a stretch at times,” he added explaining that the drivers sometimes tend to lose mental equilibrium due to excessive heat in their cabins.

Talking about the loophole in issuing driving license he said, “This is a country where license can be procured most easily, which is a major issue.” He stated that 40 per cent of the drivers were suffering from cataract when a health check-up for drivers was carried out in Maharashtra.

Apart from the steps taken up by the Government, many private organization and NGO s are also taking initiative in enhancing safety in the trucking sector.

Arrive SAFE is a NGO who raises voice against bad driving habits of people in India and brings this fact to the notice of the concerned authorities. Maruti Suzuki closely works with Ministry of Tribal Development in Gujarat to train young people in driving. Michelin, co-founder of the Global Road Safety Initiatives (GRSI), in partnership with PVR Cinemas, has conducted “Steer to Safety” program to educate children about road safety and teach them how to handle emergency situations on Indian roads. Henkel has launched a road safety initiative in an effort to address the topical issue of safety standards on the road in India.

What needs to be done:

Though much is being done, a lot still needs to be done.

Speed should be restricted at accident prone areas

Traffic rules should be enforced more strictly and diligently

Roads should be maintained in good condition. Government should give out permanent or yearly contracts for the management and repairs of roads

Not only should testing of eyesight be made mandatory before issuing of licences, regular eye check-ups must be done for drivers

Government should fund and encourage research programs to develop new gadgets to prevent accidents. There could be an alarm system in the trucks to warn the driver if the truck slows down when the driver sleeps. Again, gadgets can be developed to automatically slow down the vehicle if the truck does not maintain the required safe distance with the vehicle in the front

A safe and efficient trucking industry has always played — and continues to play — an important role in the nation’s growth. Truck drivers are the white knights of the highway who fight with every challenge (unruly traffic, unpredictable weather, bad road conditions, poor condition of trucks and many more) their way for every pickup and delivery. The economy, the companies and the government authorities have to make joint effort for ensuring safety in this sector

Varun Biyani, our Co-Founder brings 10 years experience of in IT and building systems in the Logistics space both in the domestic and international arena. Varun has a Master's Degree from Carnegie Mellon University, USA.